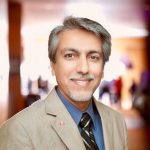 Dr. Khoja is an elocutionist, philosopher, a visionary entrepreneur & a business savvy. He has had a distinguished professional career, within the high technology realms with strong adaptive ability in leading diverse regulatory programs combined with functional expertise in science and policy domains. His industrial experience spans from advising, innovating & developing cutting-edge projects. He led multidisciplinary teams consisting of Professionals-Engineers, Scientists, and Planners. While working with them; he built a foundation of strong cross-functional skills including Research & Business Development. He has been instrumental in advising to the board for several private and publicly traded start-up companies. Since then he has been a liaison for many industrial programs.

In 2010, he founded ‘LeoFric Consultants, Inc.’ which helped design highly targeted knowledge-based solutions to address the global client’s challenges. Early in 2014, he Co-Founded InMed Pharmaceuticals and directed Botanical Drug development for their pre-clinical stage R&D, developing novel therapies into the extensive pharmacological application through cannabinoids. In 2015, he joined Affinor, Inc as a VP of Research and innovations and sat on the board of governors. He now serves as a CSO for NASH Pharmaceuticals, Inc and Oceanix Biotech; specializes in developing novel therapies through R&D into the extensive pharmacology from marine biomass and to develop GMP(APIs).

Dr. Khoja earned his PhD., with honors in Cellular & Molecular Biology’ from a French Ivy league: INP-ENSAT. He had his postdoctoral training from the Michigan State University a US land grant university. Soon after, he was appointed as a Research Faculty for Virginia-Tech, University of Wyoming & Texas-Tech University-Health Science Center. His breakthrough research work on “Algae 4 Fuel” was recognized by the US-DOE (Department of Energy) and raised $25 million. His scientific works have been published in over 30 peer-reviewed journals. In 2011, his work was honored by the United Nation’s-FAO. He is an elocutionist and has a command over 12 international languages.